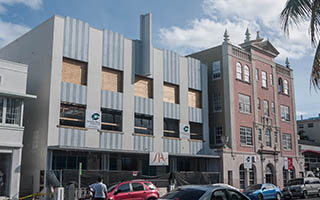 Work is underway on a complete restoration and rebuild of these South Beach landmark properties.

A once seedy neighborhood may become Miami’s coolest destination as the old Vagabond — a landmark of Miami Modern design — reopens after an extensive makeover.

Two arching jets of water at the corners of the azure swimming pool keep a steady gurgle going. Palms and an angular canopy shade the expansive bar from the summer sun. On three sides, guest rooms brought back to the jazzy pizazz of a bygone era look out into the lush pool garden.

After years of false starts and dashed hopes, the boulevard’s iconic but long-idled Vagabond Hotel, nee Motel, is again open for business under its starry-neon pylon sign. And the treasured exemplar of Miami Modern design is now probably far groovier than it ever was in its glory days in the ’50s and ’60s, when it offered affordable drive-in lodging to vacationing families.

This updated version of the 1953 Vagabond, the result of a multimillion-dollar restoration, has a decidedly grown-up vibe, designed as it was to serve as an oasis for the resurgent, gentrifying neighborhoods that surround it. Not to mention an appealing alternative to the attitudinal, and pricey, hotels across Biscayne Bay.

“We’ve had so much community support, it’s been great,” said developer Avra Jain, who snagged the vacant property a year and a half ago for $1.9 million. She has since embarked on renovations of another half-dozen motels in the boulevard’s historic MiMo district, which she’s betting will become the city’s newest, coolest destination. “It’s a good place to be because of the neighborhoods.”

To say the Vagabond’s reopening defines a sharp turnaround from the boulevard’s dodgy recent past as a haunt for hookers and drug salesmen might be an understatement. To make it abundantly clear that it’s a new day for the Vagabond and the boulevard, Jain has instituted a strict no-cash, no walk-ins policy. “And no hourly rates,’’ she joked.

The Vagabond, designed by Robert Swartburg, the well-known architect of South Beach’s Delano Hotel, had long before descended into near-decrepitude when it last admitted a guest some eight years ago. New owners tried to keep it going with a clothing shop and a farmer’s market while they gutted the building in readiness for restoration that never came, foiled by the economic collapse.

The motel’s resuscitation is also vindication for city officials and local residents who have long tried to engineer a comeback for the boulevard, Miami’s signature drag, and its defining MiMo motels and buildings, often in the face of substantial skepticism.

The once unappreciated MiMo style, a South Florida version of modernist building design playfully adapted to the subtropics, has increasingly gained popular, political and academic recognition, particularly in Miami and Miami Beach, as a distinctive architecture worthy of preservation — though efforts to salvage MiMo buildings in Fort Lauderdale and Bay Harbor Islands have floundered because of opposition from elected officials.

Fans of the Vagabond credit a set of city policies: designation of a protected historic district along the boulevard north of 53rd Street, restrictions that controversially capped heights of new construction at 35 feet, and the enactment of a program allowing owners of historically designated buildings to sell “air rights” to finance renovations — which Jain used to renovate the Vagabond.

And because of Jain’s example, there’s more to come, Regalado said. Investors, including some with “big New York money,” he said, are looking at the boulevard. So are owners of creative businesses, retailers and even more restaurateurs, she added.

“We’re getting the coolest people coming to the boulevard,” she said.

For Jain, though, the Vagabond is only the start.

Down the street, she has bought the South Pacific, with its landmark leaning facade, and the adjacent Stephens, whose former courtyard is now getting a curved new glass facade — designed by D.B. Lewis, also the Vagabond’s restoration architect — to house a Starbucks. She’s also purchased the Bayside Motor Inn 20 blocks to the south, with plans to convert it into small boutique offices.

She also owns the Royal, next to the Vagabond. It’s in the initial stages of a gut renovation, after which its 24 rooms will be added to the Vagabond’s 45 rooms.

She’s far from alone. Across the boulevard, hot restaurant operators 50 Eggs are restoring another old MiMo motel to house their headquarters and test kitchen, and new restaurants are popping up in nearby storefronts.

Not that anyone could possible be confused about the Vagabond’s wished-for clientele in any case. A tall hedge screens off the pool garden from the boulevard, and the entry courtyard has new gray-brick pavers and an exact reproduction of the Vagabond’s original Jetsons-era cloud-and-stars sign next to a new bike rack.

The bright rooms and furnishings, all by design star Stephan Dupoux, mix tropical colors and MiMo geometrics with touches of mid-Century Danish style.

Out front, the Vagabond will again have a sit-down restaurant — a casual seafood diner — once build-out is completed, probably in October. By this weekend, when Jain expects to have a liquor license in hand, the bar and pool patio — which is fully wired for sound and Jain calls the “heart” of the hotel — should be in full swing.

“This place will be packed on weekends,” said real estate agent Lyle Chariff as he toured the Vagabond with Jain and some clients who are considering leasing in one of her other MiMo buildings.

His business partner, Mauricio Zapata, who lives in adjacent Belle Meade, said the Vagabond will be a convenient, easy-on-the-pocketbook place to put up visiting friends.

Though the revived Vagabond first admitted paying guests on Monday, Jain describes the opening as “soft” — meaning there’s been no big promotion or marketing yet — to allow its efficiently bustling staff of 20 to iron out any kinks. Still, she said, some rooms have already been booked for the Art Basel Miami Beach fair in early December.

The job of restoring the Vagabond has been so intense, Jain said, that the fact that it’s actually open seems unreal. But like the dream of seeing people strolling to dinner along the boulevard, she and Del Vecchio said, it’s actually happening.

Read the full article on the Miami Herald Website 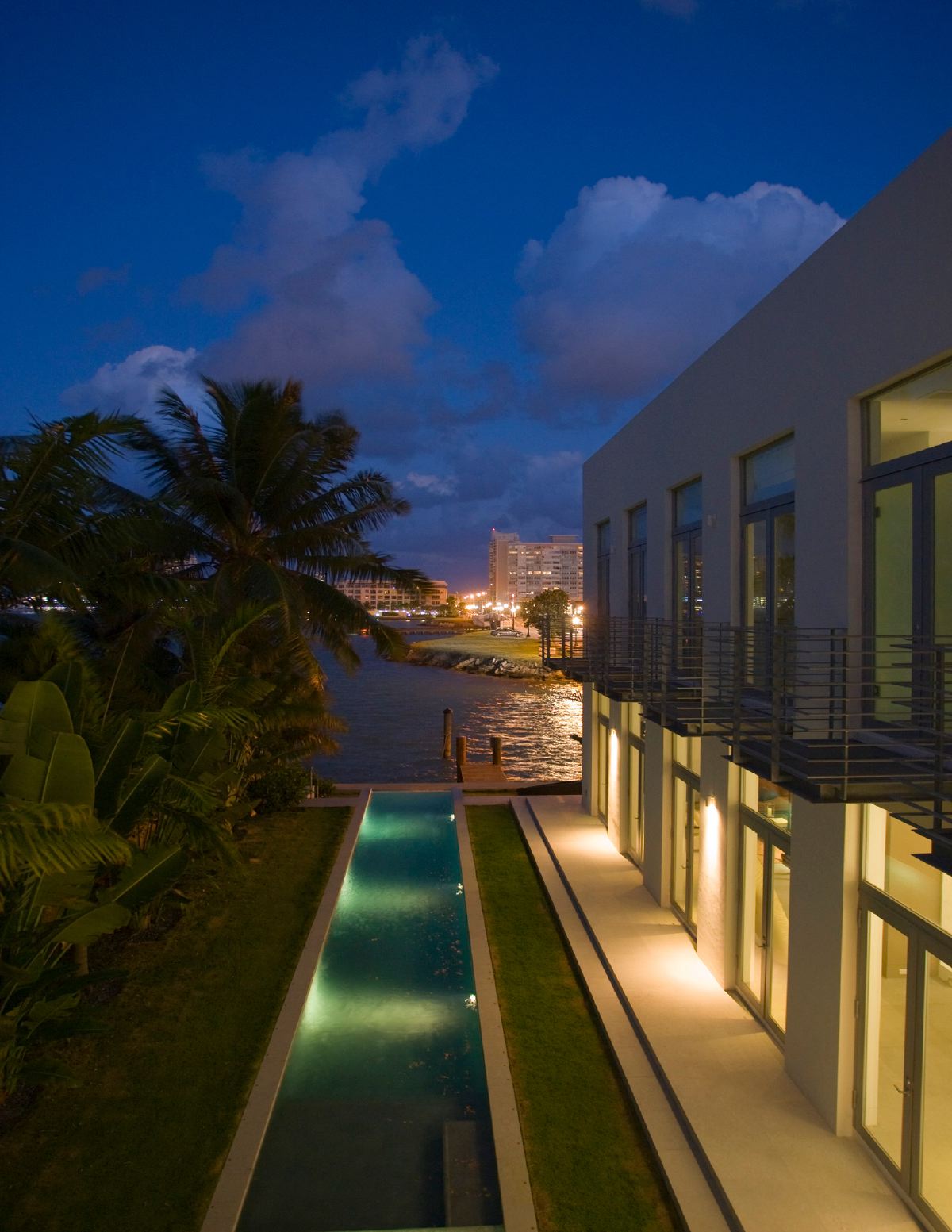 The Belvedere House is a single-family residence by Shulman + Associates located on Rivo Alto Island along the Venetian Causeway between mainland Miami and Miami Beach in Florida. I love the view from both the ground and the roof deck.

The island’s long, narrow, waterfront lots inspired the design of a linear structure, sited to create a protected sideyard garden along its north side.  On the other side, the house is sheltered from the traffic and the overhead power lines along the Causeway.

The site is divided longitudinally into two zones: garden and house. Within the linear garden landscape is a sequence of outdoor rooms: a drive court, a bridged entrance over a carp and lily pond, a two-story porch and outdoor living room, a lap pool/jacuzzi and, finally, a dock in the waters of Biscayne Bay.

The belvedere is the focal point of the site, creating vertical relief from the horizontal flow of spaces progressing from the street out to the Bay. On the ground level, it forms a covered entrance to the interior atrium and lookout over the pool area. On the second level, it provides an outdoor living room that features a spiral stair to the roof deck and views of the water and surrounding cities.

The main entrance to the house, just off the belvedere, includes a 2-story interior atrium with a spiral stair at its center, a sculptural element that binds both floors and each side of the structure. The house takes advantage of its long, narrow massing to create an indoor sequence of high-ceilinged spaces that are naturally lit in the daytime and cross-ventilated to allow comfortable interaction with the outdoors. French doors on its North, East, and West sides allow the house to be opened completely to the garden, patio, and Bay.

This design capitalizes on the opportunities offered by its difficult site and explores the expression of “indoor-outdoor” living in Florida.”

See the original article and photos>